You can find our latest posts on this page. Click on the calendar to review postings from prior periods and remember to check back here often!

The article proceeding below was written by author and Civil War authority Scott Akridge of Bradford for a 2009 Memorial Day tribute to Dr. James W. Tapscott.  Akridge is an active member of the White County Historical Society and he was instrumental in the achievement of this event.

Some nearly 160 years have passed since the event that divided our country so great.  But the valient men and women who fought for their beliefs are still being remembered and honored for their contributions, such as the life given saving others as Dr. James W. Tapscott done.

Let's be reminded of one of the many great statements in our Holy Bible: John 15:12-13

This is my commandment, That ye love one another, as I have loved you.

Greater love hath no man than this, that a man lay down his life for his friends.

On May 23, 1999, a ceremony was held in the West Point Cemetery in honor of Dr. James Tapscott, a physician killed at the Battle of Whitney’s Lane on May 19, 1862.  Also included was the dedication of a heritage trail panel marker installed in the West Point Cemetery which interprets the Civil War in that community.  More than 100 persons were on hand for the dedication.

During Samuel Curtis’ foray into North-central Arkansas in May 1862, the first significant resistance encountered by the Federal troops occurred when a detachment of the 12th Texas Cavalry and William Hicks’ Arkansas Cavalry (later the 32nd Arkansas Infantry) surprised a Federal forage party along a portion of the Searcy toWest Point Road locally known as Whitney’s Lane.  The hour-long action resulted in at least 55 Federal casualties but only four known Southern casualties.  One of the Confederate casualties was Dr. James Tapscott of West Point.

According to oral tradition, Tapscott was killed when he attempted to mount a horse belonging to one of the Federal soldiers.  Just as he thrust his foot into the stirrup, a Federal soldier ran from behind a wagon where he had been hiding and slashed Tapscott with a sword.  Captain Francis Chrisman of Searcy, who served as guide to the Texans that day, wrote to the assistant adjutant general in Little Rock on the evening of the battle stating, “Dr. Tapscott … fell fighting with great gallantry.”

Tapscott was buried in the West Point Cemetery and a small marker placed on his grave. Over the years the cemetery became inundated with forest growth and the Tapscott marker was broken in time.  In the 1980s, the citizens of West Point cleared the cemetery and in 1995 the surviving portion of Dr. Tapscott’s stone was discovered.

With an enormous amount of initial assistance from Don Hamilton of the CACWHT, Scott Akridge and Emmett Powers designed the layout for the panel. The decision was made to follow closely the example set by the CACWHT in designing their Little Rock Campaign markers. 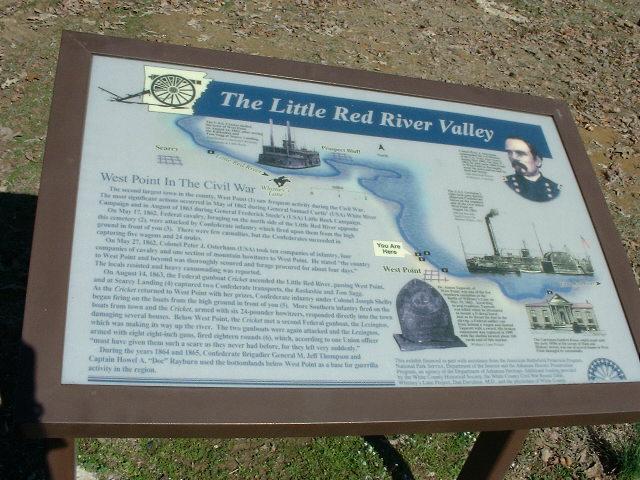 The panel interprets primarily the two major events affecting the town of West Point during the war.  The first occurred in late May of 1862 when Colonel Peter J. Osterhaus, commanding Curtis’ Third Division at Searcy, took some 1,000 Federal troops to West Point to thoroughly scour the town and beyond for food and forage.  The locals resisted and heavy cannonading was reported.  The second event interpreted on the panel was the shelling of the town and surrounding area by the U.S.S. Cricket and the U.S.S. Lexington in August of 1863 during Fredrick Steele’s Little Rock campaign.

The Tapscott monument, which was originally only about 18 inches tall, was replaced with an eight-foot obelisk.  Tapscott was from a family with a long history of physicians and the new monument was designed in a style similar to theirs.  The original inscription was retained on the new monument; the only words added on the front were, “He died risking his life for his patients.”  These words reflect the idea of community service which all doctors share.

The West Point Cemetery is now a beautiful, well-kept cemetery located along the Little Red River about one-half mile north of the town of West Point.  The dediction ceremony opened with Dr. Davidson explaining his inspiration for the project.  Akridge spoke on the history of the Civil War in the area.  The National Guard provided a color guard for the event and Tom Ezell of the 6th Arkansas Infantry fired a salute in honor of Dr. Tapscott. 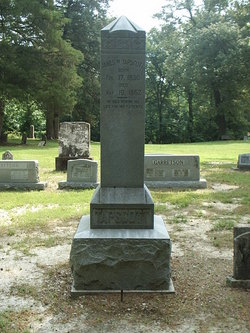