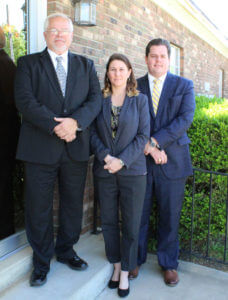 The Cole Family have decades of experience in funeral service. Wesley and Donna Cole owners of Sullivan Funeral Care have served the families of Central Arkansas for many years. Donna is a graduate of the University of Arkansas Community College at Hope, where she received her Associates Degree in Funeral Service. Over the years she worked for many funeral homes over the state as a trade embalmer. Through her years of experience, she has gained skills that have allowed her to serve families in special way.

Wesley is a graduate of Gupton-Jones College of Funeral Service in Decatur, Georgia. During his 20 years of funeral service, he has served hundreds of families in Central Arkansas during their most difficult time. After years in management, he and Donna decided to take the next step into ownership. In April of 2018, they purchased Buie Funeral Homes in Rison and Sheridan, which have been family owned since 1925.

In 2018, Wesley's father, Vince Cole decided after 30 years of being an Antique Furniture Dealer to join his son and daughter-in-law in funeral service. Vince has since received his funeral director's license and is a Certified Crematory Operator through the National Funeral Directors Association. In May of 2022, Ashley Cole joined her father and brother in funeral service and is currently working toward her license through our apprenticeship program.

In August of 2022, The Cole Family purchased their third location, Sullivan Funeral Care from Mark Sullivan.

The Cole Family promises to serve you like family. Feel free to stop by and a member of our family will be here to help in any way possible.